A Visit to the Stamp Show in San Jose

Last Saturday I went to the Great American Stamp Expo held at Napradek Hall in San Jose. Several other FSC members were in attendance as well. Like most other collectors, I went to the show with a want list. My list was quite short as I wanted a used 10 cent Panama Pacific Exposition (400 or 400A) and an unused 10 cent Monroe (562) from the 1922 Fourth Bureau issue. Since I'm not seeking investment pieces, I am much more forgiving in terms of condition. A light hinge will not be a deal breaker in itself for me.

The five and ten cent issues of the Panama Pacific Exposition of 1913 are two of the most beautiful stamps in our history. I bought a nice used ten cent (400A) with light cancellation marks.  Many other collectibles from the expo survive. Coin collectors are familiar with the commemorative coins also issued which include the rare $50 gold coins, both round and octagonal.

The 1922 Fourth Bureau is another one of my favorite series.  I was in need of the ten cent Monroe and found a nice one at the show.  While the centering may be a bit off, it has nice color and is well struck. 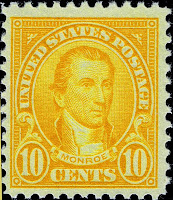 My stingy budget allowed me to get another item at the show.  While looking through exposition postcards, I ran across a nice one from the Alaska-Yukon Exposition of 1909.  The card has some condition issues but I like the scene on the front as well as the message and expo station cancellation on the back. For a nominal price, I couldn't pass it up. 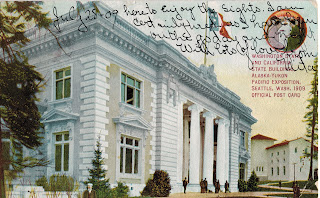 I noticed the address on the back as Jersey, Arizona. I lived in Arizona many years and never heard of that town. There is a good reason as the town no longer exists. Jersey was a short-lived gold mining town near Prescott.  It existed for only a few years. There are no remains of it, except of course for this postcard! 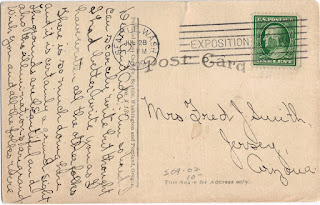 The Fremont Stamp Club is proud of member Henry Marquez who won the Single Frame Champion of Champions Award at the 2012 APS Stamp Show. His exhibit, The First Coil Stamp of the World, discusses the Peruvian coil issue of 1862.  It is a complete study of the stamp and has wonderful illustrations.

You can view the complete exhibit here. Enjoy.
Posted by Alan No comments:

This upcoming Saturday and Sunday, Jan. 26th and 27th, the Great American Stamp Expo will be held in San Jose. The address is Napradek Hall, 770 Montague Expressway. Hours are from 10 am to 6 pm on Saturday and 10 am to 4 pm on Sunday.
Posted by Alan No comments: