By 1914 Mexico was in its fourth year of revolution. General Victoriano Huerta led the autocratic regime which was unsuccessfully fighting off a number of revolutionary groups at the time. President Wilson strongly opposed to Huerta’s dictatorial government and refused to recognize it. Wilson sincerely wanted Mexico to have a freely elected government.

The increasing friction between Mexico and the US reached a boiling point in early April 1914 when Mexican forces arrested a small group of sailors from the USS Dolphin in Tampico. The sailors were released shortly thereafter and Mexican officials gave an apology. However, Rear Admiral Henry Mayo, the ranking US commander in the area, insisted on a twenty-one gun salute to the American flag. This may seem archaic by modern standards but back then naval salutes were routinely done. Earlier in the month American ships gave three twenty-one gun salutes on the same day to commemorate a past Mexican military victory.

Several other small incidents occurred with American forces. Furthermore a German ship was headed to Vera Cruz with a huge shipment of arms for General Huerta’s troops. US forces landed at Vera Cruz on April 21st with orders to seize the customs house where the ship would unload the arms. Wilson naively thought the Mexican people would appreciate foreign help in toppling a repressive dictator. They did not. Surprisingly Gen. Huerta privately welcomed the US intervention as he thought it would provide a means for uniting the people under his failing regime.

US forces stayed in Vera Cruz through November 1914. Nineteen servicemen were killed, seventy were wound and Mexican casualties were about 200 killed and 300 wounded. Huerta was deposed in this time in favor of Carranza. Two years later Pancho Villa and his forces would attack Columbus, New Mexico and further strain US-Mexican relations.

Postcard mailed on April, 21st, the day of the invasion, on the hospital ship USS Solace. 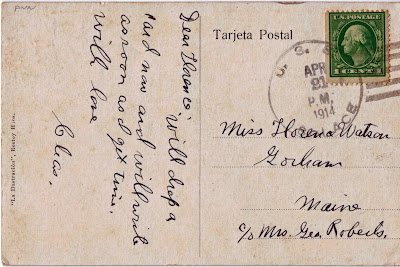 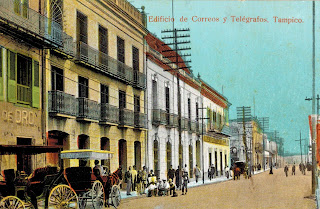