A Neat Piece of Americana

PSE graded stamps may be all the rage in the stamp world but my true philatelic love is the cover. I recently acquired the cover below addressed to Eddie Cantor dated April 9, 1937.  Not familiar with the name Eddie Cantor?  Don't worry, he's not well known as his heyday was back in the 1920s and 30s as a singer/comedian/radio host.  The Wikipedia article on him provides excellent background information. 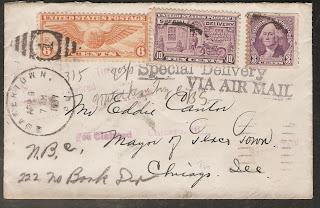 I call this cover a piece of Americana as it is addressed to his fictional title as Mayor of Texaco Town. Cantor had a popular radio program called Texaco Town. Apparently someone later added the street address on the front. I did find a YouTube clip from the Texaco Town program featuring Eddie Cantor with British film star Leslie Howard.  It is still funny (at least to me).

The sender of this cover spent quite a bit of money on it.  The nineteen cents in stamps includes six cents for airmail and ten cents for special delivery.  The date stamps provide a history of the cover's travel.  It began in Quakertown, PA at 7 am on April 9th, next stop was Reading Terminal in Philadelphia at 9 am, Newark, NJ at noon and then on to Chicago for delivery at 8:05 pm on the same day. 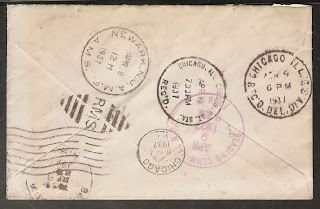 Next meeting: March will be an online meeting.