I really enjoy perusing the listings on eBay for philatelic items. Sometimes I run across an item of which I know nothing yet want to learn about its history. To me this is the best part of stamp collecting.

One such item was a cover addressed to Countess Alexandra Tolstoy at the Tolstoy Foundation in New York dated April 2, 1939. I never heard of this organization nor did I know anything about Alexandra Tolstoy. Thanks to the internet, I was able to gather some great background info on her in a matter of minutes. The youngest daughter of the noted author, she fled the USSR in 1929 to the US after being imprisoned by the communist government.  Understanding the plight of Russian refugees, she set up the foundation in 1939 along with several other motivated individuals. 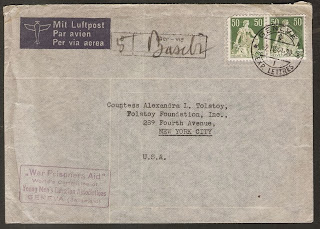 I found a wonderful essay online written by Scott Moss entitled A History of the Tolstoy Foundation 1939 - 1989. The essay is almost forty pages and thoroughly discusses the foundation's activities over the years. The foundation's early years were quite challenging.  Ms. Tolstoy started in a room donated by an Episcopal church in New York with funds totaling $25.  Several years later they were sending several hundred thousand dollars to help captured Russian soldiers during the Russo-Finnish War. As with future conflicts, the biggest problem was repatriation to the USSR which often meant a death sentence.

The Foundation moved to its present day rural location in New York in 1941, allowing more room for its activities.  Over the years the mission of the organization expanded to serving non-Russians.  Unfortunately the Foundation's website is not active at the time of this writing according to their "under construction" message.

The cover I purchased was sent to the Foundation for the first two years they were located in the one room in the Episcopal church on Fourth Avenue. This fact makes the cover more special.  Also, note the War Prisoner's Aid cachet in the lower left hand corner.
Posted by Alan

Next meeting: December meeting is in person.