The Austro-Hungarian Consulate -- in New Orleans!

I recently bought the cover below that originated from the Austro-Hungarian Consulate in New Orleans.  One does not normally associate Austria-Hungary, a long defunct empire, with New Orleans.  This cover intrigued me and I decided to do some research. 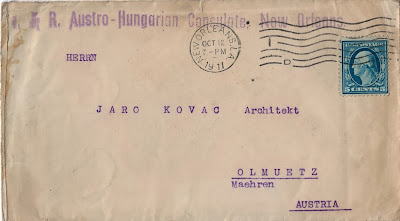 I found an excellent book on Austro-Hungarian missions in the US.  It is entitled Austria (-Hungary) and Its Consulates in the United States of America since 1820 by Rudolf Agstner, a diplomat in the Austrian foreign service. He had a small section on the New Orleans consulate and it had a long history dating back to 1837.  In fact there were many consulates scattered across the South.  The reason: economics (trade) especially cotton.  The consulate in New Orleans lasted until April 1917 when the US declared war on the Central Powers.

I wish that I could tell you stories of intrigue and spying at the New Orleans consulate.  No such luck.  I did find out that the last honorary consul in New Orleans was Franz Hindermann.  He served for twenty-one years.  One night in 1908 someone broke into the consulate and ransacked the files.  According to Mr. Agstner, no files remain past 1908.  Interestingly, the cover I bought is dated 1911.

Oh yes, I almost forgot.  I was puzzled by the I&R in the upper left hand corner of the cover.  A quick search revealed that it stands for Imperial and Royal.

I look forward acquiring other such diplomatic covers related to the Empire.
Posted by Alan